How many people do you know who have a psychosomatic allergy to gluten?

So I am on FaceBook the other day and I say…

A recently published study in the journal Digestion found that:

And if that wasn’t enough..

• Gluten Sensitivity and The Nocebo Effect

“The Nocebo Effect ( a close cousin to the more familiar Placebo Effect) is when a negative expectation of a phenomenon causes it to have a more negative effect than it otherwise would. A nocebo effect causes the perception that the phenomenon will have a negative outcome to actively influence the result. Mental states such as beliefs, expectations and anticipation can strongly influence the outcome of: disease; experience of pain; and even success of surgery.”

In 2011 Dr. Peter Gibson at Monash University in Australia conducted an experiment in which he found that gluten-containing diets can trigger gastrointestinal problems for people who didn’t have celiac disease (the autoimmune disorder that is accerbated by gluten effecting approximately 1 out of every 100 people ) and they called this new disorder Non-Celiac Gluten Sensitivity.

Doctors everywhere then began to access and diagnose this Non-Celiac Gluten Sensitivity in patients and found that NCGS also effected about 1 out of every 100 people.

August Aug. 30, 2011 cardiologist Dr. William Davis published Wheat Belly and it became No. 1 on The New York Times Best Sellers List for many weeks. In this book Davis asserted or made the claim that the modern wheat we all eat is toxic and addictive just like so many drug and it drives the people that consume it to eat more and more food thereby creating the obesity problem we have today.

While the book was extremely popular with the general public it was not backed by any peer reviewed research and was subject to criticism in the medical and scientific communities You can read some of criticism of Dr. Davis and the book Wheat Belly here: Wheat Belly or belly up? | Camistry & Wheat Belly, Busted.

But what Dr. Davis’ book and the media around it did was popularize the public’s conversation about wheat and also the new boogeyman gluten. We saw talk about gluten on Dr. Oz and as Vox health writer Julia Beluz writes “The gluten-free craze continues in the United States, fueled by celebrities such as Gwyneth Paltrow and well-debunked books like Wheat Belly.“(link)

Six years later now Dr.Peter Gibson reports he has done another follow up study in which he looked at 37 self-identified gluten-sensitive patients with the keyword for me there being “self-identified”.

Analyzing the data, Gibson found that each treatment diet, whether it included gluten or not, prompted subjects to report a worsening of gastrointestinal symptoms to similar degrees. Reported pain, bloating, nausea, and gas all increased over the baseline low-FODMAP diet. Even in the second experiment, when the placebo diet was identical to the baseline diet, subjects reported a worsening of symptoms! The data clearly indicated that a nocebo effect, the same reaction that prompts some people to get sick from wind turbines and wireless internet, was at work here. Patients reported gastrointestinal distress without any apparent physical cause. Gluten wasn’t the culprit; the cause was likely psychological. Participants expected the diets to make them sick, and so they did. The finding led Gibson to the opposite conclusion of his 2011 research:

“In contrast to our first study… we could find absolutely no specific response to gluten.” — from Ross Pomeroy May 14, 2014 Non-Celiac Gluten Sensitivity May Not Exist | RealClearScience

And Ross Pomeroy again (the emphasis is mine…

The data clearly indicated that a nocebo effect, the same reaction that prompts some people to get sick from wind turbines and wireless internet, was at work here.

In other words most people suffering from Non-Celiac Gluten Sensitivity, The 86% percent of people that think they have gluten sensitivity but don’t really have it,  have been coaxed and convinced into it by marketing. PERIOD.

In one of the best examples of science working, a researcher who provided key evidence of (non-celiac disease) gluten sensitivity recently published follow-up papers that show the opposite. The paper came out last year in the journal Gastroenterology .

I have a personal problem with people believing things that just aren’t true or that are scientifically invalid, a problem with the general publics denial and/or disrespect for expertise and scientific denialism in general that goes way beyond the scope of this polemic of mine on the Gluten-Free fad so I’ll leave that to another post and the recommendation of a few books. The Death of Expertise: The Campaign Against Established Knowledge and Why it Matters by Thomas M. Nichols (due out on Feb 2017) and the classic Denialism: How Irrational Thinking Hinders Scientific Progress, Harms the Planet, and Threatens Our Lives by Michael Specter. Misconceptions about gluten are a subset of this much larger problem of Science Denial and the denial of professional expertise.

RationalWiki wrote: “A danger to genuine celiacs is that if gluten-free is perceived as a “lifestyle” choice then many food preparers may not educate themselves or treat the condition with the seriousness that it deserves, e.g. not bothering to prepare food separate from sources of contamination that won’t harm people on some GF fad diet but can cause serious harm to a celiac sufferer. Because of this, gluten-free labeling is regulated in many parts of the world. In addition if the fad implodes as it did with the Atkins diet, then genuine sufferers are back to square one and left to deal with the misinformation fallout.”

And we should not for a moment fool ourselves into thing that the food companies are doing all this labeling and promotion of gluten free products out of concern for the heath of the 1% of people that have celiac disease or the less than 1% of people that actually have a real Non-celiac gluten sensitivity. It is about the food industry exploiting and opportunity, exploiting a fad, and creating an invented phony health benefit that they can use to sell more premium products to people who otherwise would never purchase them. Sales of gluten-free products are a big deal at around $15 billion in 2016. And while only around 1% of people need to buy gluten-free products 18% to 30% do.

• What do people really know and understand about gluten? Apparently not too much…

Gluten is the word we use for two very naturally occurring protiens, gliadin and glutenin, that occur in wheat, spelt, rye and barley that give foods containing those grains their texture and elasticity that we enjoy that together we call gluten. Again they are naturally occurring and we do not add them to enrich anything.

…gluten is being blamed for a plethora of pathologies, including dementia, depression, obesity, autism, and ADHD. Some people also insist that abstaining from gluten can actually help with weight loss — a major reason acolytes avoid grains in their diets. Science, as you might expect, suggests the relationship between gluten and health is much more complicated than that. Julia Beluz The gluten-free craze is out of hand. Here are 8 facts to counter the madness. – Vox

None of the supposed threats to our health from gluten are supported by any scientific research. None of them (outside of the 1%± that have CD or really do have NCGS)

So what exactly is gluten?

Why Is Gluten Helpful (In the Kitchen)

J.P. Sears makes hard hitting but very very funny satirical points about the people that are part of the gluten intolerance fad. 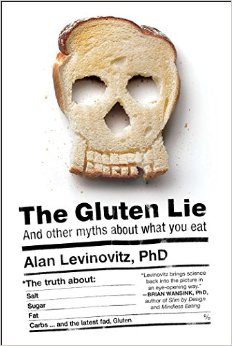 The book by A. J. Levinovitz: The Gluten Lie: And Other Myths About What You Eat

“An incendiary work of science journalism debunking the myths that dominate the American diet and showing readers how to stop feeling guilty and start loving their food again—sure to ignite controversy over our obsession with what it means to eat right.”

The real side effect of a gluten-free diet: scientific illiteracy – Vox: Julia Belluz interviews Alan Jay Levinovitz the author of The Gluten Lie. 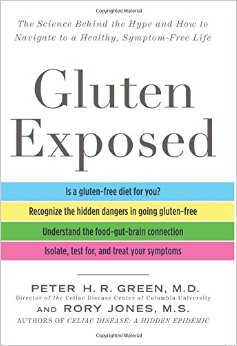 A. J. Levinovitz himself recommends yet another book describing it as “a non-revolutionary, non-miracle-promising book of genuine science by Dr. Peter Green, director of Columbia University’s Celiac Disease Center, and medical writer Rory Jones.” (The new book Gluten Exposed is a nuanced explanation of science—you won’t find that in many medical best-sellers.)

Who Are The Figures on the Other Side…