John Wayne Was A Racist Asshole With Feet Of Clay 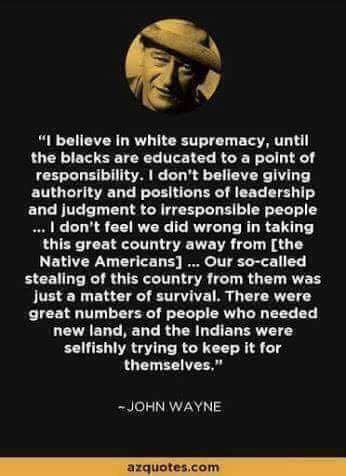 …from a Playboy interview in 1971. John Wayne was a fraud and a complete piece of shit. He dodged the draft, then built a mythology as a war hero in World War II. He turned his friends in to HUAC in their witch hunt for communists. And yet he’s almost universally still revered as the apex of American patriotism and masculinity. Fuck that guy. Snopes—Did John Wayne Say He Believed in White Supremacy?

Find this episode on iTunes. No actor on movie screens in the 1940s embodied American patriotism and unpretentious masculinity better than JohnWayne, whose career was revitalized in 1939 with John Ford’s groundbreaking western, Stagecoach. But Wayne didn’t have the defining experience of most adult

John Wayne said that he believed in white supremacy during an interview with “Playboy” magazine. A meme purportedly featuring actor John Wayne’s thoughts on white supremacy has been circulating on the internet for several years: While many memes and macros of this nature often possess either incorrect or inaccurate attributions, this quote is completely real.