Reviews of Michael Lewis’ New Book: The Undoing Project, A Friendship That Changed Our Minds 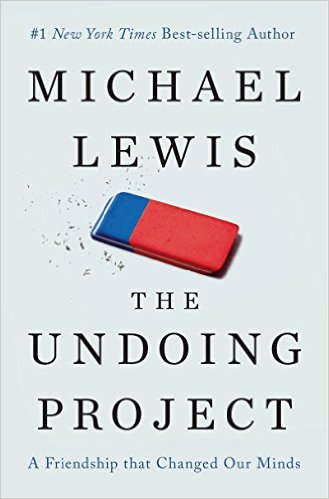 I ABSOLUTLEY HAVE TO READ THIS BOOK. I’m a big fan of Michael Lewis’s books (Moneybag, The Big Short, The New New Thing) and if you haven’t seen me quoting and citing Daniel Kahneman’s and Amos Tversky’s work from Thinking Fast & Slow about how our intuitions can mislead us you’re not reading anything I write.

“In “The Undoing Project,” Mr. Lewis has found the granddaddy of all stories about counterintuition, because Dr. Kahneman and Dr. Tversky did some of the most definitive research about just how majestically, fantastically unreliable our intuition can be. The biases they identified that distort our decision-making are now so well known — like our outsize aversion to loss, for instance — that we take them for granted. Together, you can safely say, these two men made possible the field of behavioral economics, which is predicated on the notion that humans do not always behave rationally.” — Jennifer senior

(P.S. to all my Greeley friends while I do not know her personally this review was written by Jennifer Senior a Horace Greeley High School grad and Chappaqua resident and a very good writer and speaker in her own right)

To be fair, Mr. Lewis is very aware of his quaint enthusiasms – as when he tells readers to skip ahead if they don’t care to read his footnote on Page 259, which consists almost entirely of algebraic equations. “I apologize for this,” he writes, “but it must be done.”

Are You Of Two Minds? Michael Lewis’ New Book Explores How We Make Decisions

A Friendship That Changed Our Minds Hardcover, 362 pages | We like to think our brains can make rational decisions – but maybe they can’t. The way risks are presented can change the way we respond, says best-selling author Michael Lewis.

I was hoping that Michael Lewis’s new book, The Undoing Project: A Friendship That Changed Our Minds, would offer up a bit of post-election escapism. In the book, which is published by W.W. Norton & Company and came out today, Lewis tells the story of Danny Kahneman and Amos Tversky, two Israeli psychologists whose friendship and collaboration changed the way we look at human behavior forever.

News Corp is a network of leading companies in the worlds of diversified media, news, education, and information services. ‘The Undoing Project,’ focuses on the lifelong collaboration of Daniel Kahneman and Amos Tversky, two Israeli-American psychologists who are our age’s apostles of doubt about human reason.

From Michael Lewis, the Story of Two Friends Who Changed How We Think About the Way We Think

The research of Kahneman and Tversky has become some of the most influential social science of the past century. It has helped to reorder economics by exposing the folly of economists’ belief in an unconsciously rational human mind. The work has also led to advances in medical diagnosis and patient behavior.