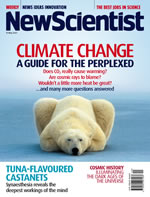 Looking for help sorting all you hear regarding Global Warming? Take a trip to the New Scientist Magazine web site and make the Climate change: A guide for the perplexed your starting point.