Matt Patterson & The New York Post Clueless About The Climate 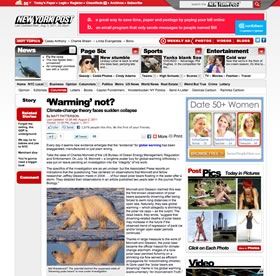 I was glancing through my mom’s edition of the NY Post today and I saw an op-ed by a fellow named Matt Patterson entitled “Warming Not: Climate-change theory faces sudden collapse” and then when I took a look at a google new feed I keep on “global warming” I saw that the top story there a Fox Nation Report Global Warming Theory Faces Sudden Collapse which was just a re-titled version of the same NYPost op-ed.

I thought,…you’re kidding me right?

Before I take this op-ed apart for what it is or should I really say it isn’t a little bit about Matt Patterson. A quick check around the net tells me he’s a political writer (aka propagandist) for a number of right wing web sites in the Brietbart network as well as writing for the more respectable but still hard right American Thinker. Now for my ad hominem,… the guys a manipulative lying jerk (well maybe that isn’t an ad hominem since I going to establish why he’s a manipulative liar).

If you breakdown Patterson’s piece he’s basically saying Climate Change Theory is on the ropes facing collapse because of two recent developments (somehow he manages to completely ignore the recent news that global warming denier challenges to the paleoclimate temperature record, the hockey stick, took a near fatal body blow this past spring when the great white hope Berkeley Earth Surface Temperature project gave a preliminary report before congress that reported that the temperature record is accurate. See the L. A. Times article for a peek at what that is all about:

The two points that Patterson says (that he thinks) are going to overturn everything are:

To the first point with a quick check around the net I find that there is no scientific challenge to Charles Monnett’s Polar Bear Research and that the controversy is all about him being suspended for problems in how he manages the project financially. AP reports that Scientist suspension is about project’s management. This is essentially a red herring, a type of straw man argument that Patterson is creating out of some real questionable financial management moves that Dr. Charles Monnett has made. While we don’t know yet what the investigation will bring, Dr. Charles Monnett may very well be a crook or he may be just an incompetent manager or he may be innocent of all charges but nothing I can find anywhere indicates that the scientific data and analysis he produced is in question. For all we know right now there is no connection between his problematic management and the science than there would be if we found out he had hundreds of dollars of unpaid parking tickets. The US Bureau of Ocean Energy Management, Enforcement and Regulation even issued a statement saying Dr. Monnett was being investigated for administrative matters, involving “collateral duties involving contracts.” Indeed there might even be some questions as to whether Dr. Monnett has been setup and the investigation is all part of an effort to speed up the issuing of Arctic drilling permits (Something Does Not Add Up).

On the second point Patterson is again being very deceptive. One single paper (unless it is startlingly spectacular is not going to take down the current thinking and opinion of the worlds climate scientists in one fell swoop and given the criticism this particular paper is getting from the scientific community (not the denial press and blogosphere mind you) it doesn’t look like this paper is that important at all.

Patterson makes the point that the paper was accepted and published in a peer reviewed journal but the journal Remote Sensing is a geographers journal not one dedicated to atmospheric and climate science and there are also complaints about the statistical integrity of the paper since there is little or no discussion of the uncertainties involved (in other words no consideration of the likelihood of results really being real) nor were the methods used in the paper discussed to the point where they could be replicated and tested by others. And according to Andrew Dessler, a professor of atmospheric sciences at Texas A&M University "He’s taken an incorrect model, he’s tweaked it to match observations, but the conclusions you get from that are not correct."

Cutting to the chase the overwhelming majority of the scientists in the climate science community are very critical to completely dismissive of the paper. In fact Stephanie Pappas, in her article for LiveScience, Climate Change Debunked? Not So Fast, on the Spencer Braswell paper wrote that "no climate scientist contacted by LiveScience agreed". The paper was for the most part ignored until James Taylor a lawyer (not a climate scientist) who writes political climate change disinformation on behalf of the Heartland Institute (a libertarian, public policy think tank that argue that global warming is not occurring and, further, that warming would be beneficial if it did occur) wrote an op-ed piece for Forbes. Patterson (a James-Taylor-Hearltand-like wannabe who I have written about before here years ago) picked up on it and echoed it.

There is no new science here in either bit whatsoever but the Taylor’s and Patterson’s who have politicized the science write the crap they do to try and manipulate and shape public opinion, not to educate it.

Patterson’s implication that this is an earth shaking paper is nothing but his own attempt creative propaganda writing.

Articles of interest worth reading on Dr. Monnett’s problems…

Articles of interest worth reading regarding the new Spencer and Braswell paper.