On The Healing Properties of Crystals… 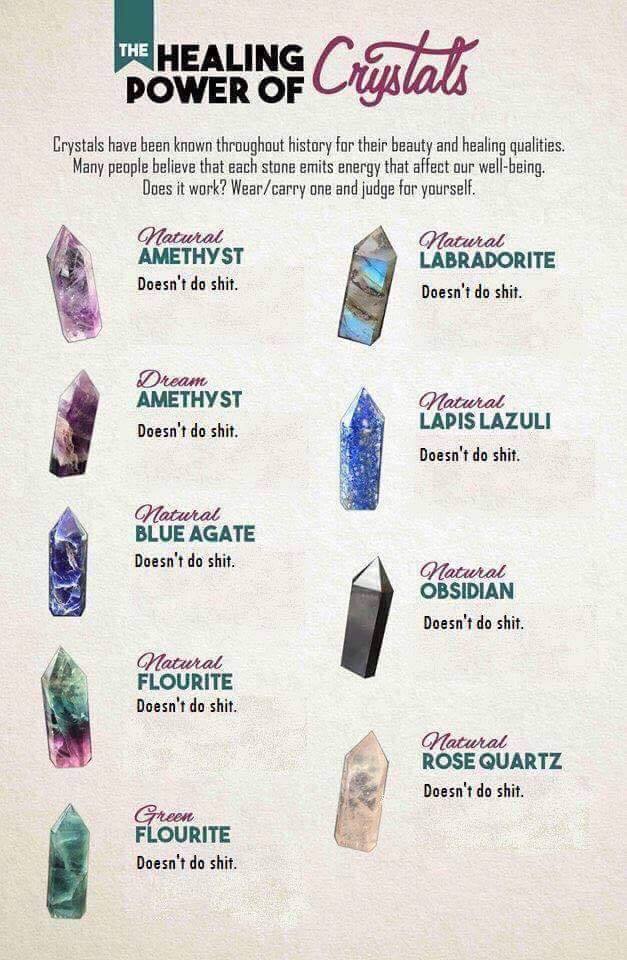 feeling of protection. This, and their aesthetic qualities, seem to be the only virtues of crystal jewelry.

(From the Skeptic article on crystals the emphasis is mine…)

….For centuries, crystals and other gems have been desired for their alleged magical healing and mystical paranormal powers. This belief continues today among occultists and New Age healers, even though it is based on nothing more than testimonials, the placebo effect, selective thinking, wishful thinking, subjective validation, sympathetic magic, and communal reinforcement. There is no scientific evidence that crystals are conduits of magical energies useful for healing and protection, or for telling the future.

We can dismiss the pre-scientific belief in the magical powers of crystals and gemstones as due to the lack of scientific  knowledge. Modern occultists, however, distort and falsify scientific knowledge in order to promote belief in their crystal products. According to the purveyors of this crystalline pseudoscience, crystals channel good “energy” and ward off bad “energy.” They carry “vibrations” that resonate with healing “frequencies,” work with the chakras and help balance yin and yang. Crystals allegedly affect the emotions and can be used not only for physical healing, but for emotional problems as well. Crystals can not only help with emotional healing, but with self-expression, creativity, meditation, and the immune system. None of these claims is backed by any scientific evidence.

The news Scientists may have shattered one of the fundamental beliefs of the New Age movement: that dangling a crystal around the neck raises personal energy levels and uplifts the spirit. A study has shown that the sensations reported by believers in crystals – such as tingling, warmth and feelings of well-being – come instead…