The Conveniently Naive Ignorance of the Conservative Right

Sometimes people on the Conservative Right are just all to conveniently naive and ignorant. The other day I posted the meme below from the Tysonism page on FaceBook… 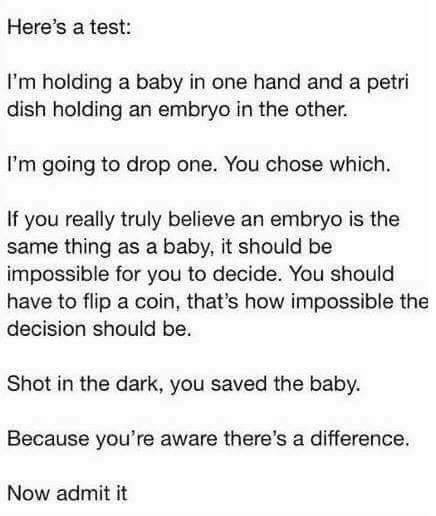 Two conservative friends of friends wandered in to add their comments and it was the second one in particular that struck me as being so conveniently scientifically naive and ignorant.

Rxxx Bxxxxxxx – What is the embryo doing in the petri Dish?

Jxxx Ixxxx – Not a difficult choice at all. If an embryo is in a petri dish, it is dead.

No, no its not. Actually on that count he would be scientifically very wrong. As another friend of mine then said…

Pxxxxx Hxxxxxxxxxx – IVF [In Vitro Fertilization] with ICSI [intracytoplasmic sperm injection] takes place in a petri dish. The resulting embryo is by no means dead.

Given the dead air I am pretty confident none of that sunk in and had any effect.

When scientists grow human embryos for lab research, they end their experiments at the 14-day mark. Until now, these internationally accepted guidelines ( and the laws formed around them) have been largely self-regulating: The record for in-vitro gestation was just nine days, and most labs struggled to keep embryos alive longer then a week.