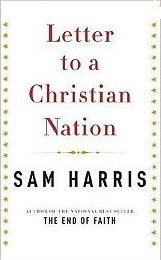 Given all this talk about Akin, Rape, and Abortion I couldn’t help but be reminded of this quote from Sam Harris from his book Letter to a Christian Nation regarding abortion:

“…20 percent of all recognized pregnancies end in miscarriage. There is an obvious truth here that cries out for acknowledgment: if God exists, He is the most prolific abortionist of all.”
_and_
“…The moral truth here is obvious: anyone who feels that the interests of a blastocyst just might supersede the interests of a child with a spinal cord injury has had his moral sense blinded by religious metaphysics.”
_and_

“…A three-day-old human embryo is a collection of 150 cells called a blastocyst. There are, for the sake of comparison, more than 100,000 cells in the brain of a fly. The human embryos that are destroyed in stem-cell research do not have brains, or even neurons. Consequently, there is no reason to believe they can suffer their destruction in any way at all. It is worth remembered, in this context, that when a person’s brain has died, we currently deem it acceptable to harvest his organs (provided he has donated them for this purpose) and bury him in the ground. If it is acceptable to treat a person whose brain has died as something less than a human being, it should be acceptable to treat a blastocyst as such. If you are concerned about suffering in this universe, killing a fly should present you with greater moral difficulties than killing a human blastocyst.

Perhaps you think that the crucial difference between a fly and a human blastocyst is to be found in the latter’s potential to become a fully developed human being. But almost every cell in your body is a potential human being, given our recent advances in genetic engineering. Every time you scratch your nose, you have committed a Holocaust of potential human beings.”

More on the Niall Ferguson Debacle

Out there in front in many cases is Brad Delong

I never was a creationist but this is still a great video and it turn out that this fellow who publishes under the YouTube channel name of atheistcoffee (I just became a subscriber) has a whole bunch of videos worth watching.