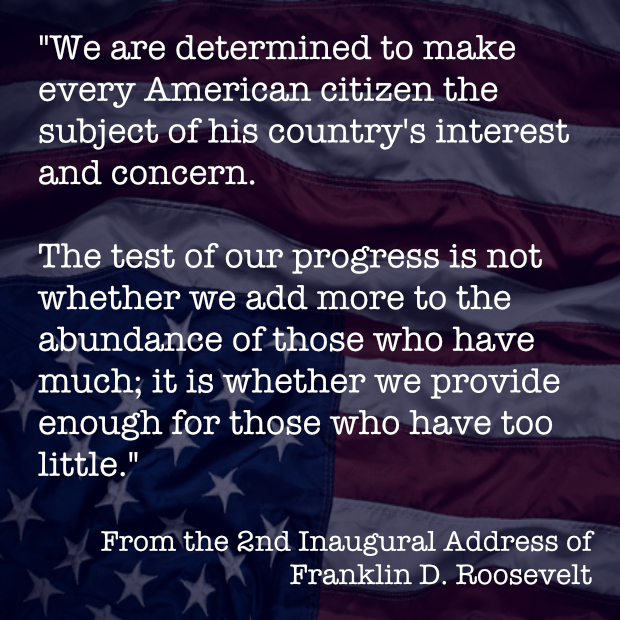 “We are determined to make every American citizen the subject of his country’s interest and concern, the test of our progress is not whether we add more to the abundance of those who have much; it is whether we provide enough for those who have too little.”

From the 2nd Inaugural Address of Franklin D. Roosevelt

Wow, well worth reading and startlingly relevant to where we are today too. For example…

…We have always known that heedless self-interest was bad morals; we know now that it is bad economics.

…In this nation I see tens of millions of its citizens–a substantial part of its whole population–who at this very moment are denied the greater part of what the very lowest standards of today call the necessities of life.

…I see millions of families trying to live on incomes so meager that the pall of family disaster hangs over them day by day.

…I see millions whose daily lives in city and on farm continue under conditions labeled indecent by a so-called polite society half a century ago.

…I see millions denied education, recreation, and the opportunity to better their lot and the lot of their children.

…I see millions lacking the means to buy the products of farm and factory and by their poverty denying work and productiveness to many other millions.

After winning a landslide victory in his 1936 quest for a second presidential term, President Franklin Roosevelt championed again the ambitious goals of his New Deal economic programs and their relationship to American democracy. … Our progress out of the depression is obvious.