Cognitive Dissonance, the reason why people to dig in their heels and hold on to their beliefs.

Cognitive dissonance is the psychological theory developed by social psychologist Leon Festinger that describes how and why people to dig in their heels and hold on to their beliefs even when faced with overwhelming evidence to the contrary. In fact the more people find their beliefs threatened and challenged the more they dig in. 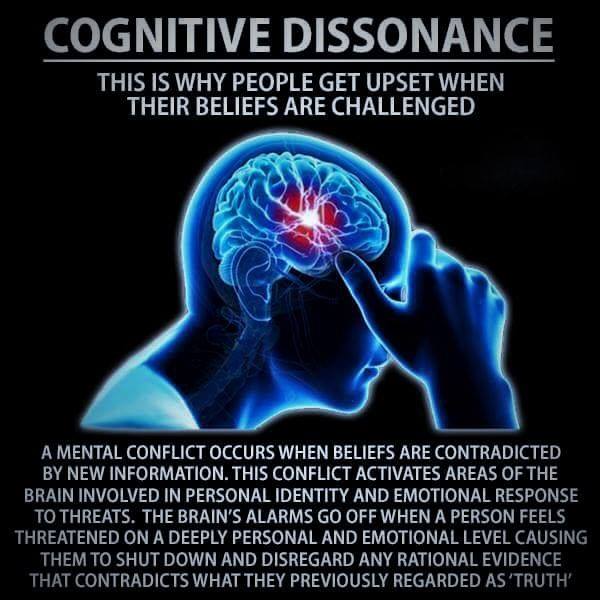 Cognitive dissonance is why changing the minds of those that disagree with us is so difficult if not fruitless and why we need to pay attention to #3 on the “Some Wise Advice Circulating” list which reads: “Do not argue with those who support him–it doesn’t work”. Instead focus your efforts on those who haven’t yet formed a strong opinion or position.

Why Changing Somebody’s Mind, or Yours, Is Hard to Do

There are a lot of psychological terms for the fact that people don’t like to change their minds; ” motivated reasoning”, “confirmation bias”, ” cognitive dissonance”. But you don’t need academic semantics to know that trying to get somebody to see things your way is tough if they go into the argument with another point of view.

“We shape our opinions to conform to the views of the groups with which we most strongly identify. The more threatened we feel…the more we circle the wagons of opinions to keep the tribe together and keep ourselves safe.” — David Ropeik