Just who is William M. Gray?

Just who is William M. Gray and why should we listen to or ignore what he has to say?

Lately it seems to me that the Global Warming Denial crowd seems to hauling out or citing William Gray (wikipedia), the popularly famous hurricane forecaster as a scientist that maybe can rescue their failing cause.

Given that my own personal un-scientific belief is that the global warming hurricane linkage is overstated primarily due to the way the press hypes it I was genuinely interested in just what he really has to the overarching topic of global warming. And I ‘ll be damned that while it not hard at all to find out that he’s a skeptic regarding anthropogenic global warming (in fact he quite militant about it) it’s been virtually impossible for me to find out why.

When he makes a statement regarding global warming he never cites any research he done (which is understandable, he a hurricane forecaster not a climatologist) or any research done by climatologists that helped him from his opinions. In fact what he often seems to say in varying different forms is:

"I’ve been in meteorology over 50 years…and I am of the opinion that [global warming] is one of the greatest hoaxes ever perpetrated on the American people."

So we should just take his opinion on pure faith based on his 50 years?

I’m not dumb, I’m not stupid, tell me what the science was that you did or studied in that 50 years that lead you to your line of thinking! What he doing throwing out that line about being a meteorologist for over 50 years is just a fallacious Argument from Authority.

I had a teacher when I was a kid that it seemed whenever you asked him a question about something he just taught he would always respond saying that he had been a teacher for 30 years and that was why we should listen to him. No explanation, no clarification, no understanding, we should just take what he says as gospel because he’s got "X number of years" experience in the subject and that should be good enough. He was a really really bad teacher. The only thing I remember learning from his classes back then was just how bad some teachers can be.

In fact in my search to find out just what was behind William Gray’s thinking what I did find was a critical article on the RealClimate.org web site entitled Gray and Muddy Thinking about Global Warming. 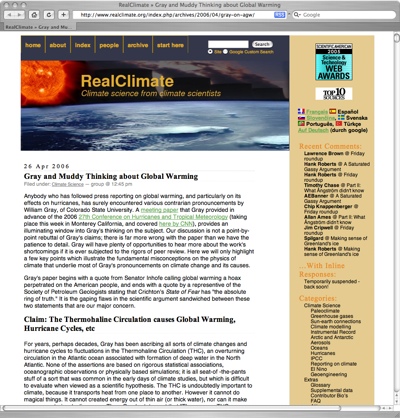