The former New York City mayor Rudy Giuliani who is going completely of the wing nut deep end introducing Donald Trump at a rally in Ocala, Florida launch this heaping pile of crap into the media sphere….

“Don’t tell me if you said that you remember Sept. 11, 2001,” Giuliani said. “I remember Sept. 11, 2001. Yes, yes, you helped to get benefits for the people who were injured that day. But I heard her say that she was there that day. I was there that day, I don’t remember seeing Hillary Clinton there. That was like when she said she had to run through gunfire. That turned out to be, what do we call it? A lie.”

Amazingly though there is this and several other photos of Giuliani and Hillary Clinton together walking the streets of downtown New York and then Gov. George Pataki in the 24 hrs period right after the attack. 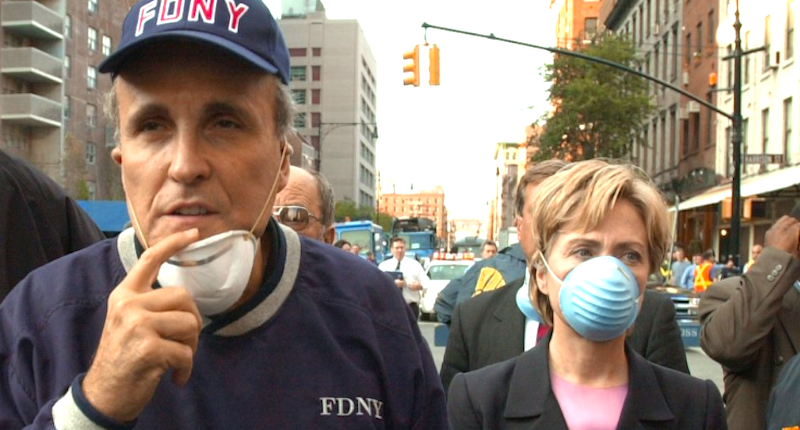 It’s sad but very clearly when Rudy Guilianni supposedly slipped in the shower and appeared on TV with a giant bump on his head he suffered a brain injury and the sections of his brain containing the events surrounding the 9/11 attack have been destroyed. Or the other possibility is he’s is a ruthless pathological liar.