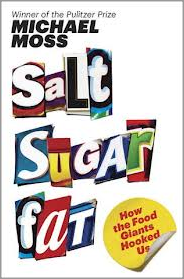 A GREAT article in the Times that is adapted from the upcoming book will be published by Random House this month: “Salt Sugar Fat: How the Food Giants Hooked Us” by Michael Moss. A couple of years ago a girlfriend of mine at the time gave me another great book that got me thinking along those lines too called “The End of Overeating: Taking Control of the Insatiable American Appetite” by David A. Kessler who was at one time back in the 1990’s  the Commissioner of the Food and Drug Administration (FDA).

Which took me to this great video presentation: