From one one of the blogs I regularly follow in the Building & Remodeling Business category (I’m a building & remodeling business and IT  consultant) John Abrams tells us about a trip he took to Virginia shortly before the election took place and while he was there a colleague who invited him down there gave him a book by a local author down there, 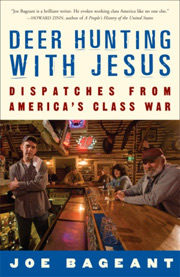 NOTES FROM A SWING STATE | The Company We Keep

“Economic, political, and social culture in America is staggering under the sheer weight of its white underclass, which now numbers some sixty million.  Generally unable to read at a functional level, they are easily manipulated by corporate-political interests to vote against advances in health and education, and even more easily mustered in support of any proposed military conflict, aggressive or otherwise. . .  Low skilled, and with little understanding of the world beyond what is presented to them by kitschy and simplistic television, movie, and other entertainments, or their experience as armed grunts in foreign combat, the future of the white underclass not only looks grim, but permanent.”

[Abrams speaking again] A large portion of these people, his people,  will vote Republican, although it’s almost suicidal for them to do so.  Their votes, if successful, assure that they will stay stuck where they are – and these are, of course, people with big hearts and lots of soul, no matter how much I may disagree with them.[…]

After going down the internet road a little after reading  John Abrams article I began to think ‘Joe Bageant,.. Joe Bageant…‘ that name sounds familiar to me. A quick search of the hard disk on my primary computer I found yes I have heard about him (and his book DHWJ) before. A couple of years ago I read this article from Mother Jones  Deer Hunting With Jesus: Dispatches From America’s Class War | Mother Jones about his and the book and I also found a lot of other folks I read online link to his old blog and or talk about him and his writing too. My interest now reignited DHWJ just got moved to the top of my reading list.

Quoting from the Mother Jones article:

“…Bageant uncovers harsh lessons about how liberals failed the people who do society’s grunt work, as well as fight our wars, and wind up with nothing to show for it but a broken-down trailer in foreclosure. They’re bitter as hell, but they “vote Republican because no liberal voice…that speaks the rock-bottom, undeniable truth, ever enters their lives.””

Tragic but true. While there are many liberals think they have won a battle now that this election is over the real truth is the elections only signal the start of the necessary ground game liberals need to move on to build a better America.