35 years ago I got clean and sober while I was in a 12 Step Program but in retrospect I do NOT think it was the 12 Steps Program that got me clean and sober and has kept me that way for 35 years so I agree with the analysis of Dr. Lance Dodes in this audio article.

When he says: —”The reason that the 5 to 10 percent do well in AA actually doesn’t have to do with the 12 steps themselves; it has to do with the camaraderie. It’s a supportive organization with people who are on the whole kind to you, and it gives you a structure. Some people can make a lot of use of that. And to its credit, AA describes itself as a brotherhood rather than a treatment.

So as you can imagine, a few people given that kind of setting are able to change their behavior at least temporarily, maybe permanently. But most people can’t deal with their addiction, which is deeply driven, by just being in a brotherhood.”—

In my case I think that is exactly what worked for me being in the group I was in and from traveling around to visit and talk with other groups I am pretty sure had I not landed where I did the results would have been very different. I needed an alternative social structure to live within which wasn’t centered around or attached to drinking and drugs and that was what I got. But there are so many others where that is just not adequate as a solution and some of the AA thinking does more damage than good.

Some More Reading On Alternatives To AA…. 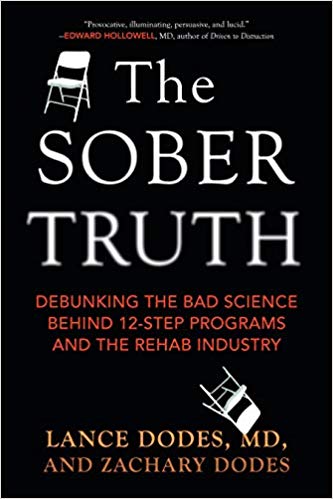 The Sober Truth: Debunking the Bad Science Behind 12-Step Programs and the Rehab Industry

Recover!: An Empowering Program to Help You Stop Thinking Like an Addict and Reclaim Your Life